Yay! It’s the weekend. I love the weekend. :) And these brownie bars are so freaking good omg. I have a thing for boxed brownies. I seriously love them so very much. I’ve made brownies from scratch SO MANY TIMES, and it’s just never as good as the box kind. They just are not. The box rules. So today, we have basically made boxed brownies even better by adding peanut butter and coconut. These brownies are my new favorite thing, better than the box! Ha! But seriously, these are bring to a friends house for a dinner party dessert worthy. Plus, no frosting involved. That’s just yet another reason why brownies are the best. You don’t have to fuss with frosting, or making it look pretty because it is already to pretty straight out of the pan! So yay, it’s the weekend, make these Coconut and Peanut Butter Brownie Bars, and eat them and love them, cause it’s the weekend. :)
♥ Teri

More bar recipes you will love:

We are big coconut fans over here! Here are some other coconut recipes we have developed: 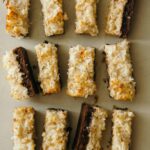