For this recipe we use the regular sized donut pans, but you can use the small donut pans if you prefer, the baking time will just need to be less. 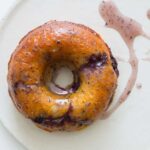