Hi Guys! Today we have a healthy meatless Monday recipe for you all; a simple and versatile Vegan Cauliflower Cream Sauce! Teri and I recently finished shooting a couple paleo and vegan cookbooks and the experience has totally inspired me to play around in the kitchen and try my hand at a few vegan and paleo friendly recipes myself.  First up is this “cream” sauce. We tossed our sauce with pasta to make a quick and satisfying meal (that won’t weight you down!), but you can also use this as a sauce paired with different cooked proteins and even as a dipping sauce for veggies, both fresh and steamed!

I’m not going to try and convince you that this sauce tastes exactly like an alfredo sauce or a full fat cream sauce because it totally doesn’t. I will say that it’s a wonderful healthy alternative for when you’re getting a hankering for something rich and creamy, but don’t want to compromise your waistline.  I like to have meals like this a few times a week, especially during the chilly fall and winter months when all I’m craving is rich, creamy, decadent foods but don’t want to gain 100 pounds by next spring! I’m no vegan cooking expert, not by a long shot ,and I know that it can be intimidating but I think this recipe is a great intro recipe to vegan cooking. It only has a few ingredients and is really easy to throw together. Plus you can adjust the ingredient amounts according to your own personal taste. Can’t find nutritional yeast or just not into it? No problem, just sub it out for any cheese alternative of your choice! Enjoy! xx, Jenny 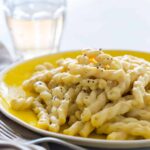