Jump to Recipe Print Recipe
EmailPinTweetShareYummly
A simple and delicious Apple Crisp Recipe with perfectly cooked apples and the most addicting, streusel top! We love serving it warm with big scoops of vanilla ice cream. It's one of our favorite fall desserts! 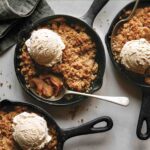 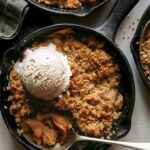 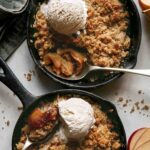 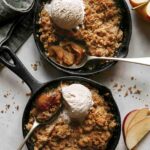 I love apple desserts so much and this delicious Apple Crisp Recipe is one of my go to dessert recipes and favorite thing to taste when the fall season begins! It’s incredibly easy to make with a delicious hint of spice from the cinnamon and cardamom! I love enjoying this dessert warm, topped with a big scoop of vanilla ice cream. It’s so hard to find a better combination!

Our recipe comes together in under an hour and you can even prep different components ahead of time to make things even easier. We made these “single serving” (although each skillet is really big enough for two people!) portions, but the recipe can easily be doubled to make in a large 10″ skillet to serve family style.

What’s the Difference Between Crisp and Crumble?

How to Make Our Homemade Apple Crisp Recipe

Tools You Will Need

Best Apples To Use For Apple Crisps

The best apples to use for apple crisps are apples that hold up well when baked. We love using gala apples because their crispness allows them to hold up to baking recipes, while the natural, mellow sweet flavor allows you to use less sugar overall. More apples that we love using for our apple crisp recipe are:

Make Ahead and Freezing Instructions for Our Apple Crisp Recipe

The streusel for the apple crisp can be made up to 5 days in advance and stored in an airtight container in the refrigerator. When ready to use, fluff with a fork until back to a mealy texture and sprinkle over apple filling.

The entire apple crisp can be made and stored in the skillets (or whatever baking dish) for up to a day. Loosely cover apple crisp with plastic wrap and store in the refrigerator until ready to use. When ready to bake, remove plastic wrap and place directly into a preheated oven. Add 3 to 5 minutes to the baking time.

If freezing, I recommend doubling the recipe and freezing in an 8″x 8″ baking dish or pan for best results. To freeze, assemble apple crisp recipe completely, but leave unbaked. Tightly cover with a few layers of plastic wrap followed by a layer of tightly wrapped foil. Place the unbaked crisp in the freezer until ready to use. Use within 6 months for best quality.

When ready to bake, remove foil and plastic wrap. Recover tightly with foil and bake frozen for about 25 minutes. Remove foil and continue to bake for an additional 20 to 25 minutes or until top is golden brown and filling is thick and bubbling.

Our easy apple crisp recipe is meant to make 3 (5″) cast iron skillets that can each be shared between two people or eaten by a single person with a large appetite! We understand that many people may not own mini skillets nor would they want to buy them just for this recipe, so below we have instructions to make large family style versions of our recipe.

To Make in an 8″ Cast Iron Skillet

Keep the recipe as written, but reduce the amount of butter used to grease the skillet to a total of 2 tablespoons. Once the apple crisp is assembled, increase the baking time to about 35 minutes.

Some Savory Apple Recipes You Will Love 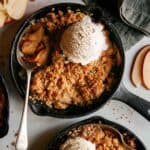