Jump to Recipe
These irresistible Carne Asada Nachos that are perfect to make for a crowd on game day, or even movie night at home!

Since college I’ve taken my nachos very seriously. While attending UCSB, I lived in the town Isla Vista, with the original Freebirds Burritos (before it became a chain). Freebirds is probably where my carne asada nachos obsession began. It was my go to late night snack spot of choice. I remember nights of climbing into bed, enjoying a giant platter of nachos while recapping the night with my friends. Yum.

Creating a great nacho experience all starts with the single chip layer foundation. Nothing bums me out more than nachos that are poorly built. You end up with an over saturation of toppings on the top layer, while the remaining tortilla chips underneath are completely naked and dry. My favorite method is making nachos on a baking sheet and spreading the  chips out to form a single layer. Then generously top nachos with carne asada and cheese and place into the oven into the cheese JUST MELTS.

Standing by your broiler and waiting for the cheese to melt is important. It’ll only take a few minutes and you really want the cheese to have the perfect consistency. You want the cheese fully melted, but not melted to the point that it begins to bubble. You want the cheese to stretch into long strings as you pull it from the pile. If you allow the cheese to get so hot it browns and bubbles, your cheese will turn rock hard the second it comes out of the oven. No good. At this point you can start going crazy over your toppings, adding pretty much whatever you want.

I’m picky about my carne asada and think we really nailed it here. The marinade is so easy to make and really flavorful. If you’re looking for a quick and easy super bowl dish that’ll definitely feed a crowd, these loaded carne asada nachos are awesome. We also have this recipe for carne asada torta, if you need another excuse to make more carne asada!  xx, Jenny

Our Carne Asada recipe packs a ton of flavor! The marinade is key, so make sure you plan ahead so you can marinate your meat overnight!

Here are some other recipes that use Carne Asada: 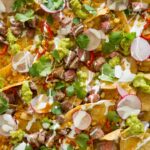