Summer is here, so it’s officially ice cream season!! Yay! We have so many fun ice cream flavors we’ve whipped up for this summer, but we’re starting with these little guys….Browned Butter Ice Cream Sandwiches!! This recipe is actually pretty simple, it’s basically a vanilla ice cream base (usually brown sugar) that has glorious browned butter added to the mix to give it a delightfully nutty flavor.

We made little (or actually pretty big) ice cream sandwiches out of the ice cream, using our waffle cone recipe but if you don’t have a waffle cone iron, then you can totally make the stove top version and they’ll still be super delicious! These little discs are actually easier to make because you loose the anxiety part of possibly burning your fingertips off whilst trying to quickly shape them into cones while they’re still hot and pliable.

I love these browned butter ice cream sandwiches and they’re really great to pack up individually and take along to a picnic (in a well iced cooler, of course!). So yay summer and yay more fun ice cream flavors to come!! Enjoy! xx, Jenny 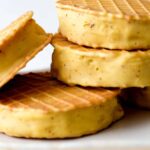