This post was sponsored by Organic Valley Butter. Thank you for supporting our sponsors. It helps keep us going!
Jump to Recipe Print Recipe
EmailPinTweetShareYummly

Browned Buttered Cinnamon Rolls. These babies are sooo good, and warm right out of the oven “how does this exist in real life?” good. During the holidays baking in everyone’s kitchen gets taken up a notch. Whether is be cookies, pies, or these Brown Butter Cinnamon Rolls, we all use a lot of butter. We used Organic Valley Butter for these Cinnamon Rolls, which you can find in most stores. These would be perfect for Christmas morning, or really any morning. They re heat very well, and are just so gooey and perfect. The browned butter we used in both the filling and the glaze gives these just the perfect touch of a caramel flavor. These are definitely a new favorite for us. Enjoy guys!

More breakfast recipes that are so delicious: 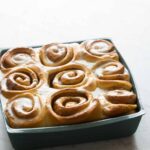