Hi Guys! Hope everyone had a great weekend! I was working on a big job Friday and Saturday so I pretty much crashed on the couch all day yesterday doing some writing, with 30 Rock on in the background, awaiting Game of Thrones. I’d say all in all, yesterday was a successful lazy day….equipped with In n Out and gummy bears. Great lil’ day, indeed! Did anyone do any fun cooking? I really didn’t have time, but this weekend I’m making this Cochinita Pibil dish again! It’s pretty much a Yucatan-Style slow roasted pork dish, marinated in achiote and citrus juices and slow roasted in banana leaves. It’s such a tasty dish! It’s actually one of my guy’s favorite things to eat and he gets it at least twice whenever we’re in Mexico. Don’t let the laundry list of ingredients intimidate you! This is a rather easy recipe to make and if you’re feeling less than enthused about the spice mixture, go ahead and play around with your own flavors (the achiote paste or annatto seeds and citrus juice are a must…other than that, do you!) You’re really just letting the meat marinate before throwing it into the oven for hours…easy!

This particular pibil you see in the photos above is actually wild boar. I only used this because I was lucky enough to score some fresh wild boar meat from one of the cooks from Bestia, Erik Sun (p.s. if you live in LA and haven’t been yet…it’s a MUST…their pastas and pizzas…I.N.C.R.E.D.I.B.L.E.). When people say “food” people are some of the nicest, most generous people. I totally agree, and here’s why. I actually met Erik through an old friend’s brother. I haven’t spoken to my friend in yrs., just little texts and facebook posts here and there. Her brother actually reached out to me via instagram saying that his friend is heavily into food, like me, and I should meet him. Not in a weird/creepy type of way, but more in a “you guys could probably pick each other’s food-centric brains for hours” type of way. Long story short, I discovered this guy doesn’t only work in restaurants, but he is also a great wild boar hunter, deep sea fisherman, sea urchin spear fisherman, etc. Whoa. My mind was blown. The most awesome part of Erik’s passion for obtaining the freshest food available; he’s a firm believer in using as much of his “kills” as possible and leaving little to no waste. It’s really not a “just for sport” thing for him (which I’m really not into…because I think it’s sad). He respects the animals and that’s super important! It was really incredible and inspiring to meet Erik (Pursuit of Food is his instagram account…go check it out!!!) You’re probably wondering why this weird rant came about, because clearly I went on a tangent. The point of this story was that he had an abundance of freshly hunted wild boar a couple months back and was looking to give it away. I told him I wanted it and the next thing I know I’m meeting a generous stranger at the restaurant he works at so he could give me pounds upon pounds of wild boar meat. Pretty awesome, if you ask me!

I brought my almost 30 pounds of meat home and started to break it down, ribs and all. The boyfriend and I were pretty much eating wild boar for weeks. (no complaints here) I think if I use wild boar for this dish again I won’t trim the fat as much as I would regular pork. The meat is much more lean and my results were slightly dry. I’ve since made it again with pork with nice, moist shredded results. I love turning dishes like this into tacos, but you totally don’t have to. I’ve added instructions for my quick pickled red onions and super simple cilantro crèma. It’s a great dish to make for a crowd. You can set up a taco bar with fixin’ and let people go to town. Taco bars are the best. Enjoy! xx, Jenny 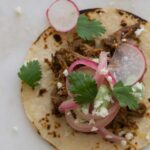