Jump to Recipe
A recipe for Croque Madame toast. Toasted bread smeared with mustard and topped with thinly sliced ham and creamy cheese with a mornay sauce and an egg! 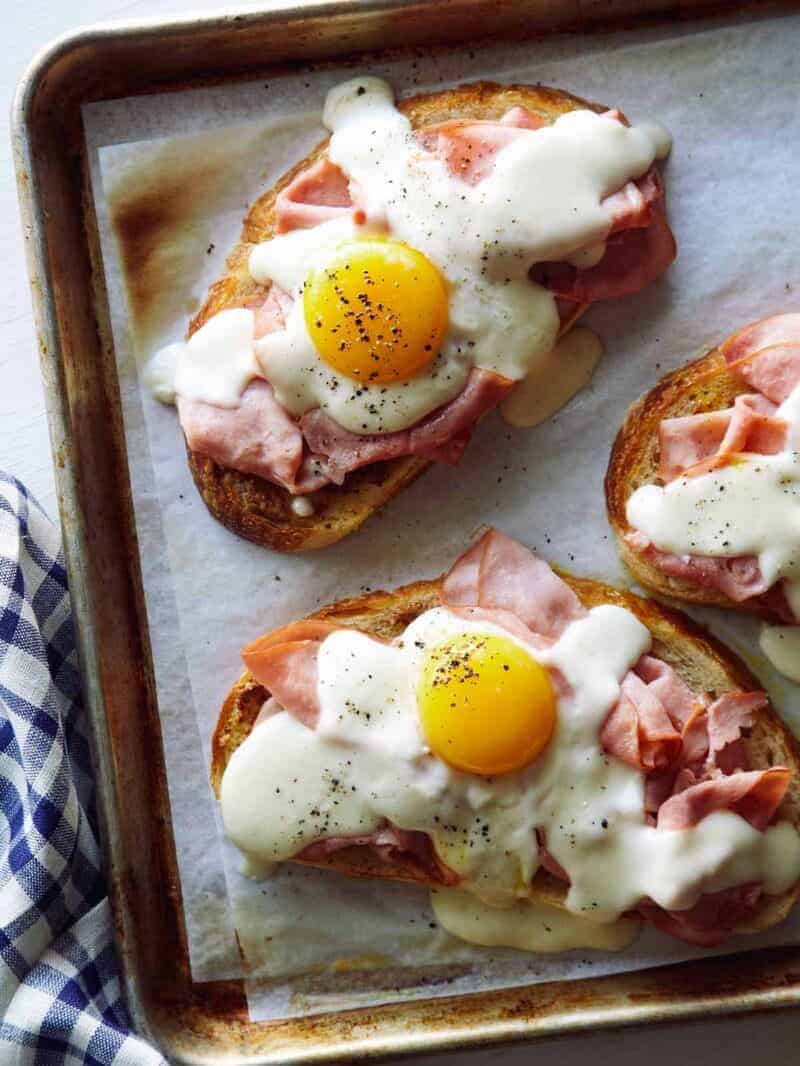 Today we have this beautiful creamy and delicious Croque Madame recipe. This is a riff off the traditional recipe, as we made them into toasts and just used egg yolks. You can definitely just make a fried egg instead and that is just as good!

What is a Croque Madame?

It’s a delicious french sandwich typically eaten for breakfast or brunch, but people do eat it during all times of the day. The sandwich is made with a toasted piece of crusty bread spread with whole grain mustard, then topped with thinly sliced ham, a soft creamy cheese and then another piece of toasted bread to close the sandwich. That is then smothered with a mornay sauce, and topped with a  fried egg or poached egg, here we have opted just for the egg yolk.

What is the difference between Croque Monsieur and Croque Madame?

The only difference between the two sandwiches is the that the Madame gets topped with a fried or poached egg while the monsieur does not. All the other components of the sandwich remain the same.

How to make a Croque Madame sandwich:

This recipe is actually very easy to make. Here is a step by step:
1. Make the Mornay Sauce
2. Toast the bread
3. Spread toasts with mustard
4. Top with Ham
5. Pour Mornay Sauce over each toast
6. Top each toast with an egg yolk
7. Broil for a couple more minutes
8. Enjoy!

If you love this recipe, try our Croque Madame Flatbreads!

We love using gruyere in this recipe, but you can substitute with comté or swiss, or any other great melting cheese with a mild flavor that you love! If you leave near a Trader Joe’s, they have an excellent, well priced cheese section. 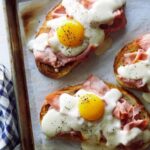 Gruyere can be replaced with other cheese such as swiss, comte, fontina, gouda, or even white cheddar.

Melt 1 tablespoon of butter (per egg) into a non-stick skillet over medium-high heat. Once butter has melted, crack eggs into the skillet and fry until the edges have browned and crisped, the whites have set but the yolks are still runny. Remove from skillet and place over mornay sauce.