Jump to Recipe
These hush puppies are deliciously savory, fried balls of cornmeal based batter. They're finished with a spicy honey sauce for the perfect sweet, spicy, salty bite! 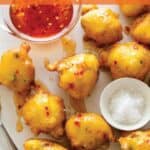 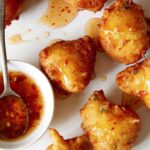 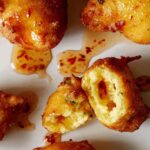 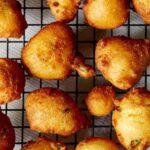 This Hush Puppies Recipe is one of our favorites! The first time I had Hush Puppies I was completely hooked. Crispy on the outside, soft and fluffy in the middle. They are seriously addicting and I dare anyone to eat just one.

We added some green onion to our hush puppies batter, for a boost of flavor, and finished ours off with a simple, spicy honey drizzle

What Are Hush Puppies?

Hush Puppies are southern, savory fried balls made from a cornmeal based batter. They’re usually eaten as an appetizer or snack.

There are a lot of varying stories about the origins, but most of them are myths. A popular story is that fishermen and hunters would fry up leftover batter (from frying fish for their own dinners). They would toss them at their dogs to eat to “hush the puppies” when they would get rowdy at night. This is something that I believed to be true for the longest time.

After doing a little digging, I found out that they used to be called ‘red horse bread’ in South Carolina. They were specifically coined by a man named Romeo Govans. He was famously known for his fish fries that included red horse bread.

Red Horse is actually a type of fish that Southerns would coat in a cornmeal based batter and fry up. They would then take the excess batter and fry up little balls to enjoy on the side or as a snack. The name ‘hush puppies’ is said to have started in Georgia. Newspapers began writing about a “cornbread concoction” by the name of Hush Puppies, although the exact origins of the name is up for debate.

How to Make Our Hush Puppies Recipe

To refrigerate: Once your Hush Puppies have cooled, place them in an airtight container lined with paper towels. Place a layer of the puppies in the container and layer another paper towel on top. Repeat.
To Freeze: Let Hush Puppies cool. Once they are cool transfer to a baking sheet and spread them out in one layer not touching. Place them in the freezer until they are completely frozen through. Transfer to an airtight tag and store in the freezer for up to three months.
To reheat: Place frozen or refrigerated hush puppies on a baking sheet spread in an even layer not touching. Preheat your oven to 375 degrees, and bake for about 5 minutes. Be sure to not burn the tops, so check halfway through. If they are getting a bit too toasty on top, you can flip them.

Is Our Hush Puppies Recipe Gluten-Free?

No, our hush puppies recipe is not gluten-free as we use a wheat-based flour. You can always try this recipe with a different kind of flour like almond, or cup 4 cup, to make these gluten-free (although we have no tested other versions) 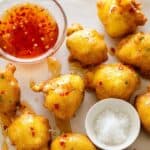