I’m currently in Boise for my sisters Bridal Shower and I’m really excited because it means I get to eat at my favorite burger place in the world: Hawkins Pac Out. I personally think that it is better than Five Guys, or Fat Burger, or even In and Out. Honestly, I am not sure if the burgers (AND TOTS! Can’t forget about the tots!) at Hawkins are actually better, it might just be one of those foods you grow up eating and as an adult still love while others might just think meh. Do you guys have any favorite foods you grew up eating that you still love that other people think are meh or gross?

Today we have a Crumb Cake recipe for you. This is a Sour Cream and Cinnamon Crumb Cake. I grew up not liking crumb cake very much. I thought it was kind of a rip off. Where the heck is the frosting? Where are sprinkles? And WHY does this taste like coffee? Obviously my first experience ever eating a crumb cake was a coffee crumb cake. As a kid I thought cake meant birthday cake. As an adult, I know it doesn’t. I have learned to like Crumb Cake now. I think a lot of it has to do with that fact there is no frosting, and that it’s a one pan kinda deal that’s really easy. The sour cream in this results in a really fluffy cake that isn’t dry which is ideal for a cake with no frosting. With Easter just around the corner this might be a recipe to consider!
♥ Teri 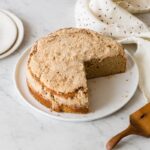